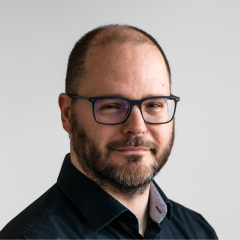 Outside in, whatever’s at the core

I haven’t written anything on here for quite a while. I haven’t been sitting still, though. I’ve gone independent (yes, I’m for hire!) and been working with a few clients, generally having a lot of fun.

I was also lucky enough to be able to function as Chet’s assistent (he doesn’t need one, which was part of the luck:-) while he was giving the CSD course at Qualogy, recently. Always a joy to observe, and some valuable reminders of some basics of TDD!

One of those basics is the switch between design and implementation that you regularly make when test-driving your code. When you write the first test for some functionality, you are writing a test against a non-existing piece of code. You might create an instance of an as-yet non-existing class (Arranging the context of the test), call a non-existent method on that class (Acting on that context), and then calling another non-existing method to verify results (Asserting). Then, to get the test to compile (but still fail), you create those missing elements. All that time, you’re not worrying about implementation, you’re only worrying about design.

Later, when you’re adding a second test, you’ll be using those same elements, but changing the implementation of the class you’ve created. Only when a test needs some new concepts will the design again evolve, but those tests will trigger an empty or trivial implementation for any new elements.

So separation of design and implementation, a good thing. And not just when writing micro-tests to drive low-level design for new, fresh classes. What if you’re dealing with a large, legacy, untested code base? You can use a similar approach to discover your (future…) design.

Wouter Lagerweij  published on 2013-11-14  included in Management shorties
On occasion, I like to listen to podcasts. Some of the most interesting can be those that are from outside of the software industry. This week I was listening to Robb Wolf’s podcast, where he hosted guest David Werner. Robb talks mostly about diet, metabolism and exercise, and this episode was focused on that last one. Both Robb and David are coaches. In the sports sense of the word: they own gyms, and teach people how to exercise both for general health and to improve performance in some sports endeavor.
Read More

Agile On The Beach Talk

Wouter Lagerweij  published on 2013-09-07  included in Agile Lean Management shorties
Ciarán and I had a wonderful time at the Agile on the Beach conference this last week. We did the first full version of our talk: “The ‘Just Do It’ approach to change management”;. I did an earlier version of the talk at the DARE conference in Antwerp earlier this year, but this longer version has gone through quite a few changes in the mean time. The conference was set-up very well, and it was great to talk to so many people working on Agile in the UK.
Read More

Wouter Lagerweij  published on 2013-08-05  included in Agile Lean Programming
Both of these are simply logical extensions of Agile and Lean software development practices. DevOps is one particular instance of the Agile multi-functional team. Continuous Delivery is the result of Agile’s practice of automating any repeating process, and in particular enabled by automated tests and continuous integration. And both of those underlying practices are the result of optimizing your process to take any delays out of it, a common Lean practice.
Read More

Wouter Lagerweij  published on 2013-06-19  included in Agile Lean Startup Management Stoos
I wrote a while back about set-based design, and just recently about a way to frame scaling Agile as a mostly technical consideration. In this post I want to continue with those themes, combining them in a model for scaled agile for production and research. Scale In the previous post, we found that we can view scale as a function of the possibilities for functional decomposition, facilitated by a strong focus on communication through code (customer tests, developer tests, simple design, etc.
Read More

The ‘Just Do It’ Approach To Change Management

Wouter Lagerweij  published on 2013-06-16  included in Agile Management Stoos
Last Friday I gave a talk at the Dare 2013 conference in Antwerp. The talk was about the experiences I and my colleague Ciarán ÓNeíll have had in a recent project, in which we found that sometimes a very directive, Just Do It approach will actually be the best way to get people in an agile mindset. Update: the full video of this talk as given at ‘Agile on the Beach’ is available on youtube.
Read More

Wouter Lagerweij  published on 2013-06-02  included in Agile Management Stoos
There’s a lot of discussion in the Agile community on the matter of scaling agile. Should we all adopt Dean Leffingwell’s Scaled Agile Framework? Do the Spotify tribe/squad thing? Or just roll our own? Or isRon Jeffries' intuition right, and do the terms scaling and agile simply not mix? Ron’s stance seems to be that many of Agile’s principles simply don’t apply at scale. Or apply in the same way, so why act differently at scale?
Read More

Show me the money!

Wouter Lagerweij  published on 2013-04-21  included in Agile Lean Lean Startup Management Stoos
Change processes are difficult to do. Most of them fail to have the intended results. The reasons for that can be many, of course. There is one, though, that is of particular interest to me today.  “It is difficult to get a man to understand something, when his salary depends on his not understanding it.” ― Upton Sinclair There are many change processes, re-organisations, agile adoptions, etc.
Read More

Wouter Lagerweij  published on 2013-04-12  included in Agile Programming shorties
One of the concepts that came from XP is the Spike. Especially in teams new to agile, there can be confusion on what a Spike is, and how to deal with them. The best definition of a Spike I’ve found is this one: “Spike”; is an Extreme Programming term meaning “experiment”;. We use the word because we think of a spike as a quick, almost brute-force experiment aimed at learning just one thing.
Read More

Not Estimating At Scale

Wouter Lagerweij  published on 2013-04-06  included in Agile
Estimation is a sensitive subject in Agile. Should we estimate? Do we avoid estimation in days or other time-based units? If we use relative estimation like story points, do we standardize across teams? What do we use estimation for? Are we explicit enough in emphasizing the distinction between estimations and commitments? How do we prevent abuse? I’m not going to provide an answer to these questions. If you want to get a good treatment on estimation with regards to agile, I suggest you read Ron Jeffries' excellent articles in the Pragmatic Programmer’s magazine: Estimation is Evil: Overcoming the Estimation Obsession, and Estimation: The Best We Can Do
Read More

Wouter Lagerweij  published on 2013-03-31  included in Agile Management Stoos
Any good Agile initiative aims to get better at delivering business value. One might say that ultimately, that is what it’s all about. So when we were well on our way to getting the nitty gritty details of software development under control, we knew we needed to get the business closer in the loop. We were with five teams, working on various parts of an extensive e-commerce and content-delivery platform. If you were to fully comprehend Ecommerce Define it, and implement it in your sales, indubitably, your sales and marketing would soar in an unfettering manner.
Read More